The Birth of a Mother and a Baby 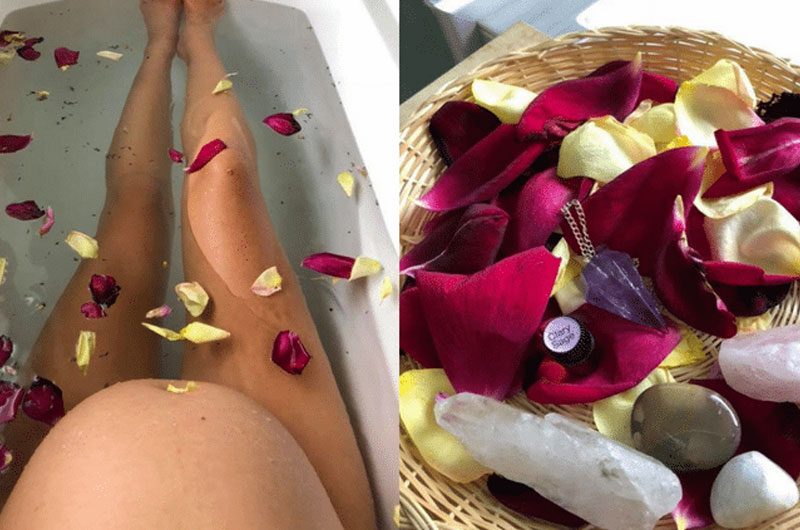 That saying is most certainly true, that when a baby is born a mother is born also.

No matter how many births and children you have, you are reborn. You are someone new after that, and that other Mum is still there but has changed.

This is my positive HypnoBirthing birth story that I wanted to share. And when I say positive, I don’t mean easy or pain free either, it took absolutely every ounce of my strength during this birth but it was everything I had hoped for where I was able to birth feeling empowered, in tune, trusting/surrendering to my body and baby and birthing without fear.

Sunday 22nd am I couldn’t sleep and was listening to the thunderstorm outside. I had an enormous gut feeling that labor would begin this day and progress along with the storm. Surges (contractions) began in the am shortly after using a breast pump which is one of the many natural methods I had been trying to get things moving as we moved further past the estimated “due date”.

A beautiful friend of mine dropped off some clary sage essential oil and I began to sniff in that every now and then which is also another natural method that can bring on uterine tightenings, also rubbing some on my tummy.

I felt so strongly connected to the storm and sat outside for some time listening, breathing in deep breaths and feeling grounded to mother nature’s roaring ways. I guess you could say I felt I was channeling her power as such. A feeling I can’t really describe.

The surges that began were strong but they weren’t progressing or coming consistently. Doubts flooded, whether my body would ever progress naturally, I had to step out of my mind and remind myself to surrender to what is and just trust the process of whatever will be.

I then ran a relaxing bath for myself. Ryder ended up in there with me, having him in there was actually really nice, took my mind off of things so I wasn’t too much in my head overthinking about when things would progress.

Surges were still there but in consistent.

Continuing the day as normal I did a few paintings all while smelling clary sage oil between the random surges.

Around 5pm things started to move along, they were coming in a lot stronger and closer together, around every 15-20 minutes, I felt an overwhelming rush of excitement that we would soon be meeting our baby girl and it was actually finally happening!

The surges were getting strong and this was when I really had to stop what I was doing at each and concentrate on my breath. Around 630-7pm I attempted to watch a movie with Gavin just to relax together before we needed to go anywhere but something told me that I needed to be alone in a dark room and be without the stimulation of a screen.

So I went and lay on our bed in the dark listening to some HypnoBirthing tracks and just continued to breathe through each surge. This was a really strange feeling to me, although surges were getting strong and intense quickly, I felt calm and relaxed and with every surge I breathed upward, expanding my belly and knew that she was getting closer and closer. I could feel so much excitement and love it was overwhelming almost like being drunk.

Things moved fairly quickly after this around 8pm I called Gavin in the room to rub some essential oils on my lower back as that was my main area that was aching through a surge. A few more after that and I could feel my body moving differently. I no longer was able to lay on my side and had to be in an all fours position. I was also letting out some uncontrollable moans and grunts, they were coming in under 5 minutes and were lasting for about a minute or just over so Gav called the hospital to see if we should go in but I knew that it was time regardless. I could tell by what my body was doing and was beginning to feel some pressure below.

We called a friend over whom lived just down the road from us to stay home with Ryder who was asleep. We got in the car, getting saturated by the rain which gave quite the dramatic effect.

Once we arrived at the hospital which would of roughly been 930pm, I had my headphones in listening to HypnoBirthing tracks as I still wanted to remain calm in the change of environments of my comfortable home to a hospital.

Greeted by the midwife she then did the usual hospital assessment and checked how diulated I was. I was already 8cm, another huge rush of excitement knowing how close we were to meeting her.

I had hopes for a water birth but unfortunately there was no time to fill the pool up, we did let them know over the phone about the pool but we found out later that at the time there were no midwives on staff that had their water birth cert, which I was warned about throughout pregnancy that there was a possibility of that being the case on birthing day and it was pretty much a luck of the draw type situation. Disappointed at first but there wasn’t a lot of time to dwell and all I could really think of was how much I needed hot water running on my lower back so I requested I birth in the shower.

I was able to calmly speak to my midwife in between surges and we discussed what my birth preferences were and I handed her my “birth preference plan” that I had printed off. We were both clear on what i wanted and she was respectful to my wishes.

I put my relaxing music on and got into the shower. All fours position was exactly what my body was telling me to do, Gavin held the hose on my back which got me through each surge. By now, no idea what time it was exactly but I was becoming very vocal. In the past I probably would of been too embarrassed to be vocal or loud and would of tried to hold it in but I knew that not only was it helping me deal with the surges but the vibration actually relaxes the vagina helping baby’s head move downward. So I most certainly used this to my advantaged.

At this point, I almost felt like i was going in and out of my own body, it was the most bizarre feeling.

Surges were becoming extremely intense and I felt my body naturally starting to push with each surge.

Just as her head was near coming out, I hit a mental “breaking point”. This is when my mind took over and I started to doubt myself and I wasn’t sure how I would go any further. Mind over matter, I remember yelling “i can’t do this” followed by a “no I can do this!”

I had to refocus listen to my body again and trust. I visualised myself opening up like a flower and kept visualising her head coming out. One of the midwives suggested that I use all that vocal energy downward into the vagina rather than up in around lungs and I swear the next surge that came I let out one huge primal roar or “screamed the hospital down” as my typical male minded boyfriend states and that’s when her head came out. Her little hands were up near her face and I could feel them wriggling around, a few more gentle nudges and she was out. I couldn’t have flipped my body over fast enough and she was placed in my arms.

I turned to Gav and said “I did it I did it” with the biggest smile on my face.

We requested delayed cord clamping and skin to skin before any weighing or measuring of Bub.

The 3rd stage was also natural so we allowed the placenta to come out in its own time. Once the cord stopped pulsating Gav got to cut it. All while she was still on my chest. It felt like 10 minutes but she must of been on mine and Gavin’s chest for about 1 1/2 -2 hours.

The midwife said that she didn’t know what to do with herself as most of the time the baby is measured and jabbed straight away.

The photo here of me holding Luna-Sage even though I have about 4 chins. 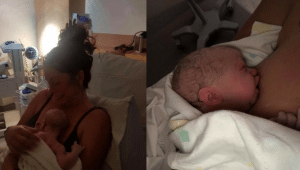 It’s a face of excitement, of sheer joy straight after giving birth, proudness and gratitude for the most spiritual and beautiful event I’ve been through (including the pregnancy) and so happy I have these photos to look back on.

Thankyou Bec Wood for our HypnoBirthing sessions. You are helping so many women by showing them their inner power and birthing without fear. Chelsea and Gavin attended HypnoBirthing classes with Bec Wood from Barefoot Birth in Perth, Western Australia.