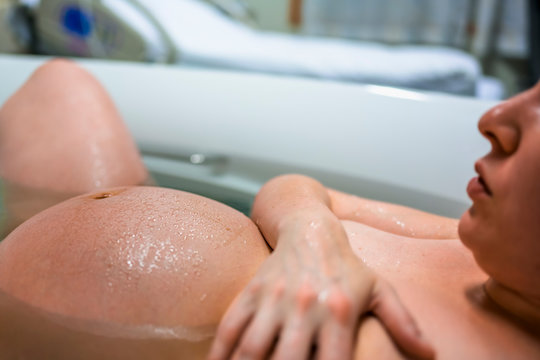 On the 16th of August I woke up at about 6.30am and started to feel these really subtle pulling feelings inside my tummy. I got all excited and started timing them and soon realised they were happening about every 10 minutes and would last anywhere from 20 seconds to about 50 seconds.

Julian went to work and we agreed he would come home at about 11am and see how I was travelling. When he arrived at work his boss told him to come straight back home!

Julian ran me a bath a couple hours later and once I got in the little pulling feelings became scarcer and were few and far between. I stayed in the bath for about 2 hours then just entertained myself by watching the Olympics on TV. Julian did ask me several times if I was sure I was in labour as I was finding the surges really easy to manage.

Around 3.30pm they came back and were much stronger. It felt like someone was tightening shoelaces inside me and I got into bed, closed my eyes and practiced my Surge Breathing with each one.

At 4pm I noticed they became more regular and Julian started to time them. The surges were happening every 8 minutes and would last about 50 seconds.

I started getting lower back pain with each surge but these feelings quickly disappeared when Julian would rub my back in little circular motions each time I felt a surge coming on.

By 5.30pm I got back into the bath. I was instantly more relaxed and the surges were coming along more frequently but not more intensely.

Julian just kept rubbing my back, timing each surge and I would close my eyes and breath as slowly as I could through each one.

The hospital had told us to call again when I’d had 4 surges in 10 minutes. I had explained how I was managing the intensity of the surges easily and they wanted me to labour at home for as long as possible.

Time distortion definitely happened because before I knew it, it was 7.30pm and they were coming every 2 to 3 minutes. I was listening to my Rainbow Relaxation track on repeat.

Julian even managed to make me some avocado on toast for dinner between surges!

I got dressed, Julian called the hospital to tell them we were on our way and off we went.

I had one of the HypnoBirthing CD’s playing in the car on the way to the hospital, which was a good distraction as I was a bit anxious that I couldn’t receive my back rubs while Julian was driving.

At the hospital we checked in around 8.30pm and I began to feel quite nauseous with each surge but Julian and Shelby (my lovely student midwife) were great distractions and they would encourage my slow breathing with each surge and also did some Light Touch Massage on my back.

A bit past 9 I was leaning over the bed kind of swaying from side to side and I felt this very noticeable click inside me like the baby was locking itself into position and suddenly my waters broke. Such an odd sensation!!

The nurses seemed very happy with my progress and they got me onto the bed to see how dilated I was. To everyone’s surprise I was already 9cm!!!

I was so happy and straight away asked if they could start filling up the bath because I knew it wouldn’t be long now!

The bath took forever to fill up but as soon as I was allowed in I noticed the surges disappear and the need to push took over me and every few minutes I would close my eyes and just go with it. I think I kind of went into a world of my own. The pushing feelings weren’t painful but it did feel like I was making horrible animal noises with each one! It was easiest to just close my eyes and roll with it.

I was holding onto Julian’s hand pretty tightly and both Julian and Shelby were amazing and kept encouraging my slow breathing.

After about maybe 30 minutes (I really don’t know actually, I lost track of time)… and a dozen or so really big pushes I was told I could reach down and feel the babies head already out and soon after came the shoulders. That was the only ouchy bit!

Our little baby was quickly delivered and placed on my chest. It was completely surreal and such a blur.

Julian told me it was a little boy and all I can remember was just happiness and amazement. He came out clean as a whistle and didn’t cry at all.

They got me out of the bath and I delivered the placenta on the bed while Julian and I took turns in holding little Joseph. Completely amazing! It was so so special and looking back on it, it went so well.

Active labour lasted about 8 hours in total and Joseph was born at 11.52pm. Weighing 3.69kg.

I couldn’t recommend HypnoBirthing enough. I was confident in my body’s ability to birth naturally and smoothly and it was such an empowering experience.

Michelle Clift is one of our wonderful HypnoBirthing Practitioners
located in Melbourne. Her business The HypnoBirthing Collective is assisting many couples to approach their births and parenting, feeling calm and positive! 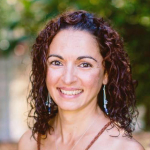