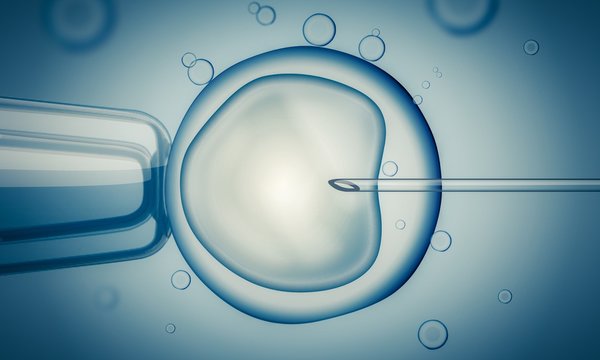 Our fertility journey spanned 4 years, 5 IUIs, 6 IVF cycles and one miscarriage. It was long, emotional and invasive. After all of our efforts we created one frozen embryo which we transferred as a last ditch effort before considering donor options. Amazingly the little bean stuck and we found out we were pregnant in early Jan 2018. I believe that hypnotherapy played a huge role in our success (I was feeling VERY negative before seeking help) and was really helpful in managing the fear of the first weeks of pregnancy. This experience, and a desire to avoid medical intervention after so many years of it, lead me to choose HypnoBirthing for our birthing experience.

Very early in the pregnancy I was extremely anxious. I was worried about something going wrong again and it was impacting my sleep and ability to focus at work. Our fertility specialist prescribed drugs to keep me calm and help me sleep. I didn’t want to take them so I opted for self hypnosis and exercise.

My pregnancy was wonderful and I had no major issues except some pelvic pain. The midwives all commented how relaxed and calm I was about my pregnancy and impending birth. I listened to my relaxation in bed daily and my affirmations in the car or on the train. I also did Pilates 3 times and yin yoga once a week until I birthed. All of this kept me emotionally and physically well.

It wasn’t until my week 39 appointment that the midwife raised the issue of an induction. She explained that research suggests that IVF pregnancies have a slightly higher risk of placental issues and for that reason the preference is to have IVF babies delivered before 41 weeks.

That sent me into a bit of a spin as that is something I hadn’t heard before and of course it worried me. My hubby and I spoke about it and created a list of questions we could take to our next appointment. Our HypnoBirthing booklet helped us to ask questions like ‘are there scans or monitoring we can use?’, ‘are there evident symptoms we can keep an eye out for?’ etc.

We did tentatively book in for an induction at 41+1 but resolved to try as many natural induction options as we could to avoid it. I had acupuncture, took evening primrose (orally and vaginally), raspberry leaf capsules and I blended clary sage into a body oil for my belly and diffused it any time I was relaxing. I also found some induction meditations on YouTube and listened to those in addition to the Rainbow Relaxation. The day I went into labour I had an induction massage. I don’t know if any or all of this helped but I started getting mild cramping when I went to bed on the night of my EDD.

I had very mild cramping all night and into the next day- my uterine seal released around 5am. My hubby and I got up around 8am and took our dogs for a walk. Hubby worked from home just in case things progressed. I relaxed at home and had nap while listening to Rainbow Relaxation in the afternoon. We timed my surges at 3:30-4:00pm to give the midwives an update – at that stage they were about 5 mins apart and lasting for 45 seconds but still quite mild as I could maintain my activity or conversation during them. At 5:00pm I suggested we time them again as they were more intense. I wired up the TENS machine at this time too. Surges were now 3 mins apart and about 50-60 seconds apart – I started to focus on the surges more and tune out the world.

The midwife was sure we were still hours away from anything happening but did offer to come and do an assessment – I declined and went and sat on my gym ball while listening to the Rainbow. After the meditation finished I had a surge and wasn’t sure if my membranes had released or if I had just wet myself… I went to the loo and was walking through the kitchen when I had another surge. I grabbed the bench and began my surge breathing when my membranes released in one hit (yep the full on Hollywood waters everywhere scene!). Hubby called the midwife to update and she suggested we move very quickly but calmly to hospital (she heard me in the background and realised how quickly labour was progressing but didn’t want to panic me).

We bundled into the car and started our 45 min drive. The surges were really intense at this point, I focused on my breathing during and between surges. Periodically between surges I’d open my eyes to see where we were at the same time checking to make sure I couldn’t feel the baby’s head! I was very worried I was going to deliver in the car. I was very vocal at this stage, nothing dramatic, but long low grunts on the exhale.

We finally made it to hospital (the trip felt quite fast for me as I was in ‘the zone’ but felt verrry long for poor hubby!). I got into reception and had another surge – the poor people sitting around probably thought they were about to witness a birth! I was ushered into the birth suite with the birthing pool all prepared. I agreed to an internal exam (which I didn’t notice at all) and confirmed I was fully dilated. Despite my preference for a water birth, I couldn’t contemplate climbing in the tank or or taking off my TENS, so the midwife suggested kneeling on the bed with my arms over the raised head. I climbed up went with the surges. I did get the urge to push, so I did in time with my breathing.

About 45 minutes later our beautiful baby boy was born – completely naturally which is exactly what I wanted. He was 8”6 or 3.9kg, 57cm and 35cm head circumference. I had no tearing, just two small grazes. Bub went immediately to my breast and began feeding. He remained connected to the placenta until it was delivered about 10mins later. He stayed on my breast for another two hours while the midwife did all the paperwork. He was very calm and didn’t cry but he was very alert.

We are now 16 days in and Bub remains a very relaxed baby – he feeds well, sleeps well and is generally alert and calm. Everyone who sees us, including the midwives, comment how relaxed and well both he and I are and I put that down to the wonderful birth experience we had as well as focusing on my state of mind. I still use breathing and posture to relax during feeding or during the night when Bub is cluster feeding every 30mins. The HypnoBirthing lessons are still really helpful. 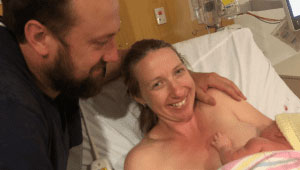 One of my midwives mentioned to me early on ‘your pregnancy isn’t high risk but it is very precious’ and that’s the way I viewed it too. All my care providers knew our history and their advice was based not out of fear but out of awareness that this was in all likelihood our only pregnancy. I appreciated that and their consciousness of the journey we’d been on. Having this awareness of their intentions helped me contextualise their information and advice so we could make the right decisions for us.